More financing needed so the full genome of bread wheat can be sequenced.

Sequencing the wheat genome has long been considered an insurmountable challenge. World demographics, however, have left society with no choice — wheat production must increase to feed a growing population. Improving average wheat yields has become a major objective with genome sequencing as its prerequisite. Last year, the International Wheat Genome Sequencing Consortium unveiled the first draft sequence of the bread wheat genome. A complete reference sequence that will pave the way to improved wheat varieties could be achieved by 2018.

The European Union is the world’s leading wheat producer, ahead of China, India and the United States, with 20 per cent of the total world harvest (140 million tons in 2013) on 26 million hectares cultivated. Today, 4.6 million European farmers depend on this crop for their income. The EU leads the world in wheat improvement with a significant number of seed companies involved with breeding and production of wheat and wheat seeds, as well as world-leading academic research institutes engaged in wheat research. In 2013, the contribution of wheat (net output) to the EU economy was estimated to be over €9 billion.

With a projected world population of 9.6 billion by 2050, the Food and Agriculture Organization (FAO) forecasts that the demand for wheat will increase by 60 per cent. To meet that demand, annual yield increases must grow from the current level of less than one per cent to at least 1.7 per cent. Since availability of new land is limited to preserve biodiversity and water and nutrient resources are becoming scarcer, the majority of this increase has to be achieved via crop and trait improvement on land currently cultivated.

For years, genomic resources for wheat improvement lagged behind other major crops such as maize and rice. Because of its size (17 giga base pairs, five times larger than the human genome) and complexity (three sets of chromosomes with highly similar gene contents and a large proportion of repetitive DNA), wheat was considered impossible to sequence. Thus, despite its socioeconomic importance and the recognition of the power that a genome sequence brings to breeding programs, bread wheat remains one of the last major crops without a high-quality reference genome sequence.

The International Wheat Genome Sequencing Consortium (IWGSC) was created in 2005 to change this paradigm. The international public-private collaborative consortium was established by a group of wheat growers, scientists and breeders. Its goal is to deliver a publicly available, high quality genome sequence of bread wheat that can serve as a foundation for wheat improvement and help to ensure profitability throughout the wheat value chain.

The IWGSC is led by a board of directors that develops the overall strategy, and a leadership team in charge of daily management. The Coordinating Committee, composed of sponsors and leaders of IWGSC projects, is responsible for establishing the overall scientific strategy and the strategic roadmap. IWGSC membership is open to any individual who is interested in supporting the goals and activities of the consortium.

To circumvent genome complexity, the IWGSC adopted a “chromosome-based approach”, made possible through technological advancements in flow-sorting of chromosomes. The IWGSC follows a milestone-based, adaptable strategy for all of the 21 bread wheat chromosomes. The three key milestones on the roadmap are to:

While the draft sequence provides useful information to breeders for marker assisted selection, the physical map-based strategy remains the only approach that can efficiently deliver, with today’s sequencing technology, a high-quality, ordered sequence comparable to the gold standard reference sequence of rice. The IWGSC regularly adapts its strategy to integrate the newest sequencing technologies while maintaining the objective of a high-quality reference sequence.

A physical map-based sequence is the best resource for understanding genome function, as it provides access to the complete gene catalogue, permits the identification and functional analysis of regulatory features and chromosomal organization, and provides accurate maps of genetic markers and intra-and inter-species variation that can be associated with specific traits such as quality, yield, drought tolerance, or durable disease resistance.

The first milestone was reached in July 2014 with the publication, in the journal Science, of draft sequences for each of the 21 wheat chromosomes and a putative order for about half of the genes on each chromosome.

“While not yet representing a complete sequence, the capacity for the first time to identify the localisation of a gene on a wheat chromosome in silico is already helping us to speed up our breeding efforts and map-based cloning projects for trait improvement,” says Catherine Feuillet, head of trait research at Bayer CropSciences and IWGSC board member.

The completion of the second milestone is well underway, as physical maps for 16 chromosomes have been developed and five draft maps should be finished before the end of 2016.

Progress towards the final milestone is gathering momentum. The first reference sequence of a wheat chromosome, 3B, was completed in France and published in 2014 in the same special issue of Science as the draft sequences. Reference sequencing of 13 other chromosomes is underway in 11 countries and will be completed over the next 18 months. The IWGSC is currently seeking funding for the remaining seven chromosomes, and proposals for two are pending before national funding agencies.

International research laboratories and seed companies have been instrumental in achieving IWGSC milestones. The wheat genome sequencing project is an example of a successful and sustainable public-private partnership with clear and consistent objectives designed to produce resources for breeders and, ultimately, growers.

The chromosome-based approach allowed the IWGSC to support building skills and resources in many countries by engaging research teams in the development of physical maps and sequences. Even though this international participatory effort adds to coordination challenges, it facilitates cost sharing and rapid application of the data into the numerous wheat breeding programs around the world.

The IWGSC currently has projects in 21 countries and 1,100 members, representing 361 research institutions or private companies in 55 countries. An additional 350 individuals from 56 institutes and five additional countries are registered to utilize the publicly available data that has been generated by IWGSC projects.

Contributions and Benefits For Seed Companies and Growers

Seed companies and grower organisations have been involved in the consortium since its establishment. An essential aspect of their contribution is to provide input on strategic orientations. For example, their input was critical at the beginning as it was necessary to decide which wheat variety should be sequenced. Bread wheat was selected as that is the variety grown by 95 per cent of the farmers. Simultaneously, seed companies wanted access to the sequence of bread wheat, rather than that of wild diploid wheat, because they wanted tools that could have a direct, immediate impact on their wheat breeding programs.

Another contribution is financial. By paying an annual sponsorship fee to the IWGSC, seed companies and grower organisations enable the professional management of the consortium, the organisation of workshops, and the development of communication materials to provide platforms for developing and advancing projects.

Finally, seed companies can support projects directly if they wish to accelerate the global achievement of the objectives. For example, in 2011, Graminor and Biogemma provided the first funding support for the draft sequencing of the 21 chromosomes, while Bayer CropScience provided €1 million in 2014 to achieve the physical maps.

In return for their support, seed companies and grower organizations are part of the Coordinating Committee and have pre-publication access to all data which can greatly accelerate the implementation of the sequence-based resources into their own breeding programs.

Varietal improvements based on data from IWGSC projects are emerging already. For example, CDC Fortitude, a new durum wheat cultivar was developed by a team at the University of Saskatchewan Crop Development Centre in Canada, in part using DNA markers that were identified from early access to the reference sequence of chromosome 3B. Moreover, about a dozen genes related to controlling traits involved in the resistance to pathogens, drought tolerance, and yield are being isolated currently using the reference sequence information of chromosome 3B.

Ultimately, growers will benefit from the work of the consortium by having access to new varieties more rapidly than today, and having access to those that are developed with technologies not yet accessible in wheat. Having an enabling tool such as a reference sequence will increase future investments in wheat breeding for the benefit of growers because companies will have a better mechanism for value capture. 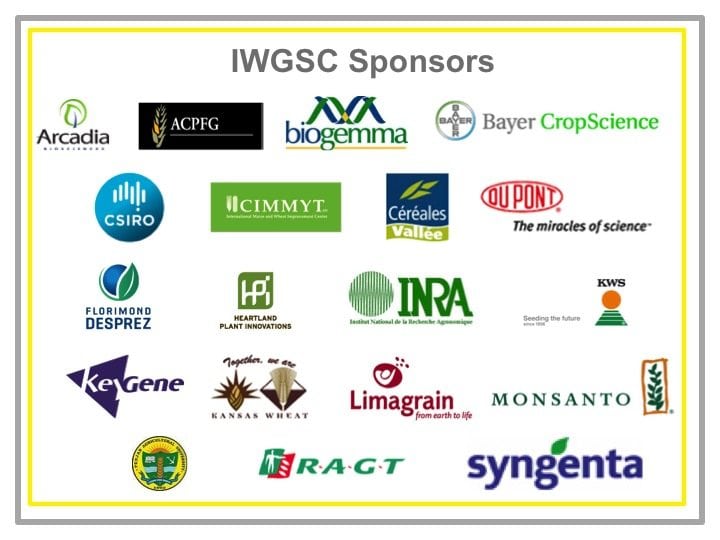 Securing funding for sequencing the wheat genome has been, and remains, a challenge. In contrast to other sequencing projects, the IWGSC has not been allocated a “lump sum” for the whole sequencing project, but has had to work with project leaders all over the world to secure funding from national agencies and private companies. Over the last 10 years, the IWGSC has raised approximately €50 million for physical mapping and sequencing projects. About €11.5 million in funding is still needed to produce, assemble, and make available all remaining sequence data. Provided that funding is secured soon, the IWGSC anticipates that a high-quality genome sequence for bread wheat could be publicly available by 2018.