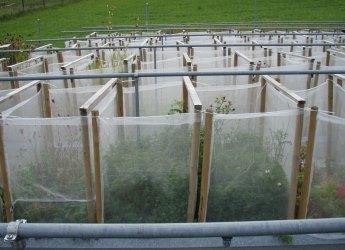 Farmers and land managers can improve agricultural productivity by using crop mixtures and taking into consideration the role of evolution in shaping the plants they grow, new research by James Hutton Institute scientists and partners at ETH Zurich and the University of Zurich has found.

In a new study published in the scientific journal Nature Ecology and Evolution, scientists have found that growing plants in either monoculture or mixtures can lead to reductions in competition between plants, but only when plants are grown in mixtures is there evidence of increased levels of beneficial “facilitative” effects.

Professor Rob Brooker, a plant ecologist in the Institute’s Ecological Sciences group and co-author of the study, said the research explored the interactions of 12 grassland species, and how these interactions varied depending on whether the plants had come from a plant mixture or a monoculture, and whether they were now growing in monocultures or mixtures with other species.

“Overall, net competition was the dominant effect, and this was not surprising as grasslands are relatively productive ecosystems where we would expect competition to be dominant. However, the level of competition was dependent on the plant’s history, and tended to be reduced in planted monocultures and mixtures if the component plants had monoculture and mixture histories respectively.

“In contrast, beneficial effects were more frequent in mixtures than in monocultures, and more intense in communities of plants with a mixture history compared to those with a monoculture history.

Professor Brooker said the study provides clear evidence that the full benefits of having species-rich agricultural systems, for example yield benefits of mixture cropping, will only be seen if artificial selection targeted specifically for mixture crops is implemented into breeding programs.

“Only mixed cropping with plants with mixture coexistence histories has the potential to not only reduce competition but also to enable the evolution of facilitative interactions, thereby maximising beneficial effects of enhanced biodiversity,” Professor Brooker said.

The research was funded by the Swiss National Science Foundation and the University of Zurich, with Professor Brooker’s input supported by the Rural & Environment Science & Analytical Services Division of the Scottish Government through the Strategic Research Programme, 2016-2021. The paper “Evolution of facilitation requires diverse communities” is in the latest issue of Nature Ecology and Evolution at http://dx.doi.org/10.1038/s41559-018-0623-2.

Researchers of the James Hutton Institute are investigating the potential benefits of crop mixtures in the context of sustainable production systems. The project TRUE (Transition paths to sustainable legume-based systems in Europe) explores food security from a legume-base perspective, while the DIVERSify initiative (Designing Innovative plant teams for ecosystem resilience and agricultural sustainability) aims to optimise the performance of cereal crops grown alongside legumes.