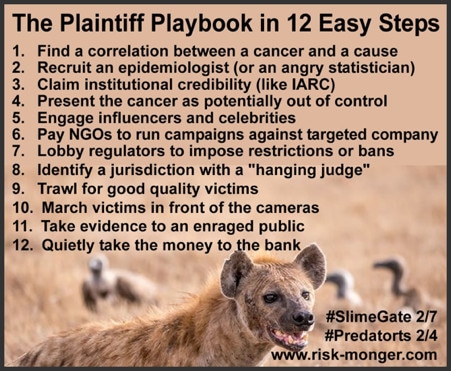 Four years ago, a poor-quality hazard assessment published by the International Agency for Research on Cancer (IARC) declared the herbicide glyphosate a possible human carcinogen. Since then, NGOs have been running well-oiled fear and outrage campaigns against glyphosate, GMOs and Monsanto, testing a wide range of food and hygiene products and finding millions of urine samples with trace residues of the herbicide. In the last year, over 11,000 people have filed lawsuits against glyphosate producers for the cancers IARC identified. These events are not merely coincidental.

I’ve been writing on glyphosate since IARC’s suspicious publication in 2015. After releasing the Portier Papers 18 months ago, I have been uncovering how deeply US toxic tort law firms have been involved in motivating IARC (via a group of politically-active scientists and NGOs) to create an environment ripe for litigation fees and policy change.

The US toxic tort legal industry has been under financial pressure. It grew too quickly during the heydays of the big tobacco and asbestos settlements and costs mounted. New mechanisms, like sophisticated litigation finance arms, were created, more competition led to bigger ad spend and longer appeal processes put more pressure on their business model. Then the US Tobacco Agreement and asbestos industry bankruptcies cut the pie even smaller, leaving an urgent search for the next big cancer. For the big tort law firms, the Predatorts, glyphosate is a goldmine.

With its hazard-based approach, IARC serves as an ideal tool to legitimise possible cancer links for tort lawsuits. Tens of thousands of lawsuits claiming cancers allegedly from talcum powder, benzene and glyphosate rely only on IARC monographs for their scientific evidence. The tort lawyers though, cannot get IARC to directly do their bidding. They need intermediaries.

Around IARC we find a special breed of scientist I call the “tort-tort”: usually a statistician or epidemiologist who seems to have a mercenary interest beyond the science. The same American scientists keep showing up on IARC panels for a wide variety of substances. Their road to IARC is an inside path either nominated via Linda Birnbaum at the NIEHS or via the Collegium Ramazzini (a private club of activist scientists based in Italy but with a large membership of American tort-torts). Once in this special network, their ideology is reinforced and empowered with opportunity.

Some scientists are merely attracted to the litigation consulting fees (at around 500 USD/hr, one case could net hundreds of thousands to pad an aging tort-tort’s pension). I have shown situations where American scientists do nothing else but serve Predatort lawsuits.

Other scientists, more dangerously, are the “true believers”. They feel cancers are caused by low-dose chemical exposures and that they are the ones in a position to stop them. These zealots advocate circumventing the democratic process of regulatory risk management by taking IARC hazard assessments directly to the US courts. My benzene exposé demonstrated the Predatort Playbook: how a group of tort-torts directly influenced IARC to hold an additional monograph to link benzene to another type of cancer. These scientists then took this to their law firms to “litigate the hell out of industry” (until, on a pure cost decision, these companies abandon the practice the scientists, via IARC, deemed hazardous).

The true believers are willing to do anything to impose their ideology. Working with the tort industry, however unpalatable, has shown to be more efficient (and lucrative) than regulatory measures. Several scientists have been so bold as to publish this strategy (calling it “tobacconisation” but also known as the La Jolla Playbook).

The Predatort Playbook on Glyphosate

When I showed how Chris Portier went straight from the IARC glyphosate panel meeting to sign a lucrative contract with law firms he had been in contact with beforehand (and for the next three years battled on their behalf to keep the IARC glyphosate conclusion relevant), I did not then realise how common this practice was.

The IARC glyphosate monograph followed the Predatort Playbook to the letter: a cancer link is instigated by toxic tort law firms using scientists via IARC to establish the sufficient causal relationship required. (At least four IARC panel members have so far served as litigation consultants in glyphosate trials.) The law firms then trawl for victims across all media. The NGOs create public outrage against Monsanto, GMOs and glyphosate (useful for jury priming). This was timed with lobbying efforts (coordinated by US activists and tort-torts) to raise distrust of regulators.

Herbicide use is now under pressure: farmers are being attacked in their fields, insurers won’t cover glyphosate, food manufacturers are looking for alternatives. The Predatort Playbook is working as planned.

Implementing this Playbook on glyphosate has damaged trust in the food chain, hurt the reputation of regulatory science and created widespread fear of agritechnology.

Worst of all, with 11,000 cases against Bayer, more than 12,000 cases against J&J on talc, we find the companies doing the most to fund cancer research are the ones being handicapped by activist scientists working with a WHO cancer agency to put them out of business. Shameful.

For sources and more information track #SlimeGate or follow David at www.risk-monger.com.