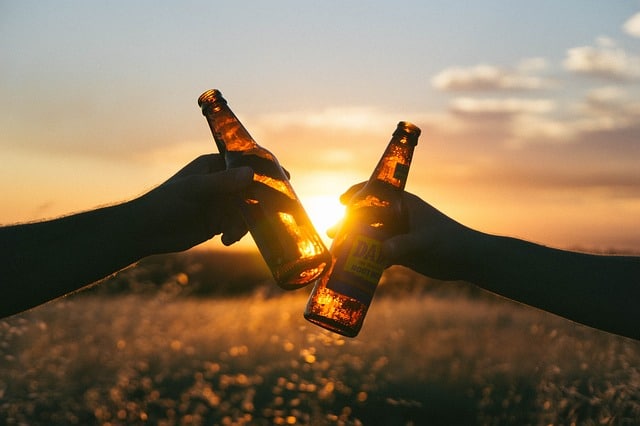 Here’s a question to ponder. When did civilization begin? When was it that we reached a sufficiently high level of cultural and technological development to call ourselves civilized?  Of course, looking at the world today, some would argue that we still have a way to go, but others point to beer as the first product of civilization. And they may be right.

The Sumerians living 5000 years ago in what is now Iran are commonly believed to represent the world’s first civilization. And they were into beer. In a big way. They brewed at least 16 varieties, all from barley. We know this because a piece of Sumerian pottery found in 1992, harboured a yellowish residue that turned out to be calcium oxalate, a signature of beer brewed from barley.

The ancient Egyptians also raised barley and developed pure yeasts to make beer. They even learned to seal beer in jars to prevent a secondary fermentation. In the Middle Ages beer was an extremely popular beverage. Fermentation yields an acidic brew that is not conducive to the growth of bacteria, so beer was certainly safer than the untreated, dirty water that most people were forced to drink. There was concern about the adulteration of beer. As early as the 11th century, Edward the Confessor employed “ale testers” to check on the work of brewers. And the world’s oldest consumer protection law was formulated to protect the purity of beer. In 1516, Count William IV of Bavaria issued the “Purity Law” which allowed only barley, hops and water in beer. It is still in force in Germany! Then, Louis Pasteur changed brewing from an art to a science when he determined to make French beer as good as German in 1870. He discovered that the spoilage of beer was due to the presence of microorganisms foreign to the nature of the true beer yeast.

Unwanted microbes are not the only enemy of the brewer’s art. The scent of 3-methyl-2-butene-1-thiol can be most disturbing. Unless you’re a skunk. In that case it’s a welcome commodity because it effectively wards off predators. But you certainly don’t want it in your beer. How does it get in there? Skunks aren’t to blame, light is! It may be hard to believe that light can alter the flavour of beer, but it most assuredly can. Hops, or more specifically the blossoms of the female hop plant, are the secret to the taste of beer. They were originally added to compensate for the sweet taste of malt but turned out to have value in the control of undesirable microbes. There are many compounds present in hops, including some which have oestrogen-like effects and have been blamed for breast growth in excessive drinkers. But it is one specific compound, iso-humulone, which seems of importance in the problem of “light struck flavour.” Light cleaves the molecule to produce an active fragment that then reacts with some sulphur compounds found in beer to form the offensive 3-methyl-2-buten-1-thiol.

Is there a solution to this problem? Sure, there is. The same way that we can protect our skin with sunscreens that filter out the most damaging wavelengths of sunlight, we can also filter out the rays that damage beer. Building protection directly into the beer bottles is the solution. And that is why beer is sold in brown bottles! The wavelengths of light that cause the skunky smell are filtered out by the brown pigment.

How can we then have beer in clear bottles? Chemical ingenuity has made this nuance possible. Through the process of hydrogenation, much as for margarines, the molecular structure of iso-humulone can be slightly altered to make it stable to light. The golden colour of beer can now be enjoyed without having to open the bottle.

A study published in the British Medical Journal examined the beer drinking habits of a group of people who had had a heart attack as well as of a group randomly selected from the Czech population. The Czech Republic is especially appropriate for such a study because it is predominantly beer-drinking country. Perhaps surprisingly, in both groups, the lowest risk for heart attack was found in men who drank about nine to twenty pints a week. Their risk was a third of that seen in the men who never drank beer. But if they drank more, the protection was lost, and problems appeared! Dark beer seems to be especially protective. It was even found to reduce the potential harm caused by the notorious “heterocyclic aromatic amines (HAAs) that form when food is heated to a high temperature. Serving dark beer at a barbecue is a good idea. Maybe Benjamin Franklin was on to something when he said that “Beer is proof that God loves us and wants us to be happy.”