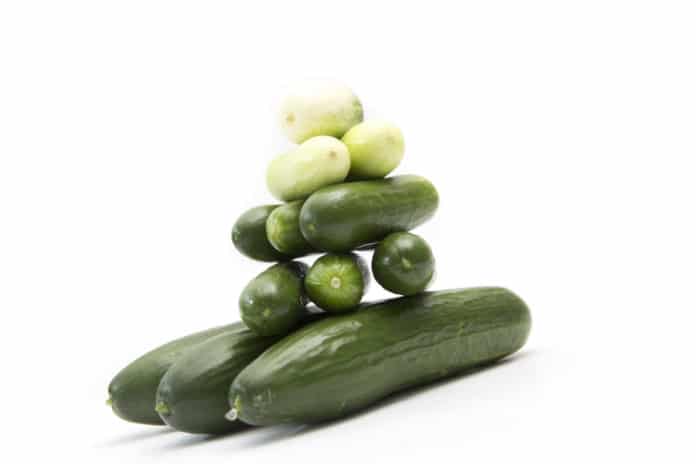 The period in a country when there is little news (often the period when its government is on holiday) is called the “silly season” and in many countries this time period carries a reference to cucumbers, like komkommertijd in Dutch, agurketid in Danish, gúrkutíð in Icelandic, agurktid in Norwegian, Sauregurkenzeit in German and many other languages, all meaning “cucumber time” or “cucumber season”.

Well, have we got news for you: cucumbers aren’t silly at all. They’re amazingly healthy! They are refreshing, nutritious and an incredibly versatile addition to any diet. They are low in calories, contain many important vitamins and minerals, as well as high water content. In addition, the fruit contains several beneficial compounds such as lignans, cucurbitacins, flavonoids and terpenoids, all associated with potential health benefits, including weight loss, balanced hydration, digestive regularity and lower blood sugar levels.

But did you know that cucumbers come in many types? For example, there are pickling, slicing, and even “burpless” cucumbers. European Seed wanted to know more about this interesting crop and spoke with a number of experts for their insights.

Cucumber is being bred in many different forms, as noted above.

“For each type, dedicated teams are working,” says Jos Suelmann, lead breeder slicing cucumbers, BASF Vegetable Seeds. An important difference between all of these types is the way they are cultivated. Pickling cucumbers are grown in the open field, while other types are grown in plastic tunnels in most countries in the world, and in high-tech greenhouses in Western Europe and Canada.

José María González-Cabezuelo, breeding manager, Meridiem Seeds says his company, is a young one that was born to meet the needs of producers in the nearest areas. “Thus, the main effort in cucumber research is focused on the Dutch or greenhouse typology, with greater presence in the Almeria field. However, year after year we have a greater international presence, which means that we are expanding the focus on the breeding of other types grown in the countries of our customers,” he says.

It basically depends on the number of markets and differentiation that has to be covered, says Jesus Abad, cucumber global breeding lead, Syngenta. “Probably the type with more market segments and variation for plant adaptability is the Beit Alpha Type, and therefore, the number of prototypes that we have to create is higher. Different from other crops, the specificity of fruit quality is so high that there are few chances to share breeding programs, so that there is one specific program for every type.”

“In our cucumber breeding programmes, we mainly focus on long cucumber and mini-cucumber. We develop new varieties with combinations of important traits, adapted to local circumstances with added value to our customers: both for the grower, industry and consumer,” says Bal.

Since its establishment in 1991, Moravoseed has expanded its product range to include more than 435 varieties of vegetables, says Radek Aust, executive manager, Moravo Seed. In the actual assortment there are 23 varieties of gherkins cucumber, 10 varieties of greenhouse cucumbers with different fruit lengths and five American slicer-type cucumbers.

“We have a growing share of parthenocarpic types with multifruit effect of gherkins. Greenhouse cucumbers are represented from the smallest size of fruits with 10 cm up to 40 cm. The largest proportion of breeding work therefore falls on gherkins and greenhouse cucumbers,” he adds.

“We currently have breeding programs for Dutch, beit-alpha, pickling and slicing typologies. We also have a program for special types such as mini or snack,” says González-Cabezuelo. Bal indicates this his company is actively breeding for all types.

Aust states that given the wide portfolio of customers, they´re focusing on all basic types of cucumbers and have the potential to include new innovations in existing types and marginally also in exotic Asian types of cucumbers.

Peter Kraan, R&D coordinator cucumbers BASF Vegetable Seeds,shares that the company’s focus is on the markets where cucumbers are produced indoors, and also on pickling cucumbers. The focus is defined by the market size and expected profitability of the different markets. “Consumers will become more demanding with regards to production conditions but also towards health and taste. In our breeding we anticipate these market developments,” he says.

There is a lot of variation in the cucumber’s sex expression and there are plants with only female flowers (gynoecious) and plants that have both female and male flowers (monoecious). Suelmann indicates that all of their varieties for protected cultivation are gynoecious. Growing cucumbers indoor requires gynoecious and parthenocarpic varieties.

“Within our programs we are mainly working on 100 per cent gynoecious types. Fortunately, cucumber is a crop where you can alter the sex expression easily. This makes breeding for gynoecious types and seed production of genetically gynoecious varieties possible,” he says.

Sexual expression is one of the most important factors in breeding, in addition to resistance and tolerance to pathogens in cucumbers, says Aust.

“We observe that some older cucumber genotypes are more sensitive to changing the growing and climatic conditions. Especially in the European production areas of gherkins, we are increasingly encountering extreme weather fluctuations during the growing season,” he adds.

Typically, these are temperature fluctuations in the late May period that fall below 10 C. This results in undesirable changes in flowering type. “In our gene sources we have materials that show high stability and are the basis for breeding new varieties.”

Bal says 95 per cent of their breeding material is dedicated to female, parthenocarpic material and shares that for seed production an active silver component (Ag++) is used to change sex-expression from female to male.

“Definitively, when dealing with greenhouse high yield material we go to gynoecious (GY) parthenocarpic material. Monoecious is still interesting when we work in environmentally challenging conditions where we need to spend initial energy on growing a powerful plant and producing male flowers in the beginning is having less energy cost,” says Abad.

“There are challenges to come on the use of GY where we need to apply Silver Thiosulfate (STS) for pollinations. We need to continue working together as an industry to show that certain formulations of STS can be used with no/low risk for environment.”

González-Cabezuelo shares that practically all the varieties obtained by Meridiem Seeds are parthenocarpic, whose sexual expression is gynoecic. He says the main obstacle with this type of character is getting male flowers to reproduce both lines and hybrids safely. “The use of hormonal regulators very controlled by our geneticist is fundamental to solving this difficulty.”

The task of breeding is to provide growers with a variety that satisfies not only quantitative, but also qualitative prerequisites, says Aust. However, quality fruit yield is one of the main parameters that is increasingly related to disease resistance and cucumber resistance to abiotic influences in the environment. The earliness yield curve during vegetation and overall plasticity of the variety are then monitored.

“However, we must not forget about one of the most important characteristics of cucumbers for the end consumer, such as the taste and consistency of the flesh. This applies to all types of cucumbers,” he adds.

For Bal and his company, it is important to make the world more sustainable. “So, we are constantly looking at the actual disease and pest pressure for our crop. Fusarium (Forc) is an important threat in mid tech situations like Spain and Greece,” and he proudly adds that last year his company launched their first variety with Fusarium resistance in these countries.

Abad explains that cucumber is basically a producing machine where yield and regular quality are main factors, and therefore a breeder needs to build the main chassis by prioritizing these factors. Of course, when diseases are a limiting point, resistances are becoming a must.

González-Cabezuelo concurs that these are the main objectives of the cucumber breeding program in all its typologies. The minimum requirements for a variety launched on the market are increasing year after year. Therefore, new varieties must be totally up to date with the needs that may arise in any growing area.

One of the big challenges for all growers will be to grow sustainable crops, says Kraan. One way to reach that is to complement genetic resistances with crop protection programs.

“Our main breeding goal is still on resistances and yield. On the other hand, we see a big increase in demand towards different cucumber types. For example, the snack cucumbers were barely present in supermarkets the world over, and nowadays we see them everywhere. We develop snack cucumber varieties that are adapted to different growing systems.”

He says yield will always be a top priority in their breeding, but not necessarily as extra kilos — more from the perspective of economic yield, like extra resistance that will lower the disease pressure.

“This lowers the costs for the grower and probably increases the economical yield.”

This was an interesting point of self-evaluation and assessment of their breeding, especially when looking at the tremendous yield of some old varieties, says Abad.

“We have been focused on regularity and reliability during these years more than on a massive increase in yield. There is still room for improvement and big possibilities when using new technologies.”

Bal estimates an increase of maximum one per cent per year as breeding effect on the yield increase. “Further increases in yield are realized by technical developments (like high wire with assimilation light and higher CO2 level) and movement from flat outdoor cultivation to vertical to indoor (tunnel) f.i. Asian bicolour.”

The total yield of cucumbers depends on many factors and is greatly influenced by the technology of cultivation, technology of protection and harvesting and the quality of human labour during harvest, says Aust.

“As part of our breeding program, we regularly compare yields, especially field trials, with several repetitions, even among our breeding stations. If we compare the yields in the basic types of gherkins over the last 10 years, when we include several new products with resistance to ZYMV, CMV, CCu, powdery mildew and tolerance to downy mildew, we can talk about the increasing in yield of 30-40 per cent in real conditions.”

For Suelmann, it is new diseases that make it difficult to estimate and compare yield over different areas.

“Often big jumps in yield are obtained when changing growing systems, such as in the Netherlands and Canada where growers move from the so called ‘traditional’ system to the high-wire system. The area where yield increase probably is the most visible is the German pickling cucumber market.”

“Yes, there are regional differences in yield increase, especially in areas where non-parthenocarpic mixed flowering varieties are changed for parthenocarpic, female varieties. Examples are the development of gherkin in U.S. and India,” says Bal.

Aust concurs, explaining that tracking revenue by region today is not a simple task due to many influencing factors that are different for different regions. Today it is more a recommendation of a suitable variety for the area and use.

“However, we can observe that with the warming of the climate, cucumbers can now be successfully grown in areas where it was not possible before. In contrast, in classical cucumber areas, it is necessary to respond to a higher incidence of pests and higher infectious pressure of cucumber diseases. Here we promote new resistant varieties.”

“Yield ratio is usually sensitive to both different locations and different crop cycles. That is why the variety selection process carried out by Meridiem Seeds is conducted by testing them in different areas and different seasons, for several years before going to market, to ensure stable behaviour,” saysGonzález-Cabezuelo.

How Did Legumes and Nitrogen-Fixing Bacteria Learn to Work Together?