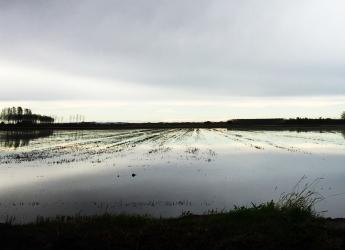 A new hydrological study co-authored by James Hutton Institute PhD student Camilla Negri and colleagues based in Italy has shown that winter flooding, the application of water onto agricultural lands to recharge groundwater aquifers during wintertime, can promote the resilience of aquifers used for rice production.

The study looked at winter flooding in three rice-producing areas in northern Italy for 18 months. Usually, land managers flood fallow fields to manage straw reside and inhibit weed seeds germination, and until the start of the RISTEC project (EU-RDP 2017) potential hydrological benefits of this practice in Europe were unknown. The study shows that winter flooding can help maintain higher groundwater levels until the beginning of the agricultural season, potentially increasing rice irrigation efficiency and protecting ecosystems reliant on groundwater.

Camilla explains: “Our results showed that the percolation efficiency of winter flooding is very high and that local groundwater levels underneath the recharge areas increase at a similar rate as during the summer flooding and reach peak values that are close.

“However, the rate of level decrease after the end of the flooding period is much faster with the winter flooding, when pre-flooding groundwater levels are re-established in one month, in contrast with at least two months with the summer flooding. We think this is because the areas adopting winter flooding are less extended and more fragmented than the ones flooded during the agricultural season.

“Consequently, to maintain higher groundwater levels until the beginning of the cropping season, winter flooding should last longer and involve larger and more compacted areas.”

The findings could have major implications for the resilience of groundwater aquifers in crop production areas, especially considering the large amounts of water used in rice production. The more widespread the application of the practice, the larger the groundwater recharge will be. Winter storms’ floodwater could also be diverted onto fallow fields, hence improving resilience in the face of climate change.

Moreover, farmers’ livelihoods can be positively impacted by the adoption of winter flooding, as the practice increases the landscape value of the territory, provides ecosystem services and allows farmers to apply for benefits from the Rural Development Program of the European Union.

The UK's supply of fruit and vegetables has become increasingly reliant on imports from countries vulnerable to climate change, according to a new study...
Read more
Crops

A new study shows diversifying agricultural systems beyond a narrow selection of crops leads to a range of ecosystem improvements while also maintaining or...
Read more
Crops

Intervention To The UPOV Council By The Secretary-General, Mr. Daren Tang

Speech given at the 54th Ordinary Session, October 30, 2020 Mr. Marien Valstar, President of the UPOV Council, Distinguished Delegates, Ladies and gentlemen, I would like to express...
Read more
Business

IFA’s Chairman Mostafa Terrab (CEO of the OCP Group), together with the IFA Board of Directors, announced today the appointment of Ms. Alzbeta Klein...
Read more
Barley