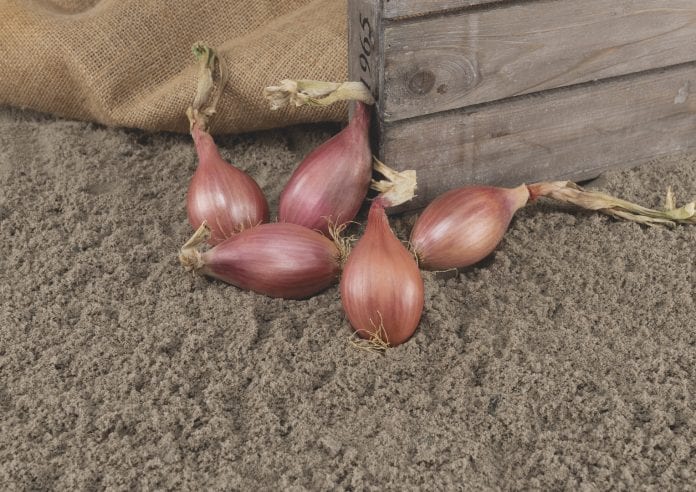 After years of breeding, Bejo/DGS introduces the first downy mildew resistant shallot from seed, Innovator. A hybrid variety with a slightly longer bulb and a distinct colour, which is suitable for the long day areas.

Downy mildew is a severe problem in production fields in many parts of the world. It infects the leaves of the shallot, eventually causing major losses in harvests or destroying crops completely. Innovator is well suited to the organic market but is also very desirable for the conventional market, as it requires less crop protection. Organic seed of Innovator will be available in the near future. Innovator offers very healthy propagation material as a shallot from seed, delivering a huge advantage compared to a shallot from set.

Timo Petter, Crop Research Manager at Bejo, says,“In the mid-80s, our breeders took the downy mildew (HR: Peronospora destructor) resistance out of the wild Allium specie A. roylei into the shallot specie. Through classic (natural) breeding, crossing and selecting, we have developed parent lines carrying the resistance in them. Additionally, the variety has characteristics like vigour, spherical shape, multiple growth points, dry matter content, firmness and a good skin quality.”

After extensive and perennial testing of parent line combinations in hybrid crossings, the hybrid shallot from seed, Innovator, was selected as the best and most stable crossing. The total development process, from the first specie crossing until having the commercial hybrid seed for introduction to the market, has lasted 30 years.

Petter adds, “After this long period of breeding, we are very proud of the new variety Innovator. It is an exciting addition to our shallots from seed assortment.”

During this long period of testing and selecting, the breeders gained valuable experience with the built-in downy mildew resistance, the hybrid in the cultivation, in storage and with the parent lines in seed production. This gives the confidence that Innovator combines the unique downy mildew resistance with the highest quality features seen in other shallot from seed varieties bred by Bejo/DGS.

The resistance to downy mildew is an important characteristic of Innovator, but it also has other benefits to the grower. The variety has a good yield and is very suitable for long storage. The shallot from seed is nice red/brown with an internal pink colour and has an elongated shape. Innovator is ideal for the fresh market and industry and has the same vigour and storability as the standard variety, Conservor.