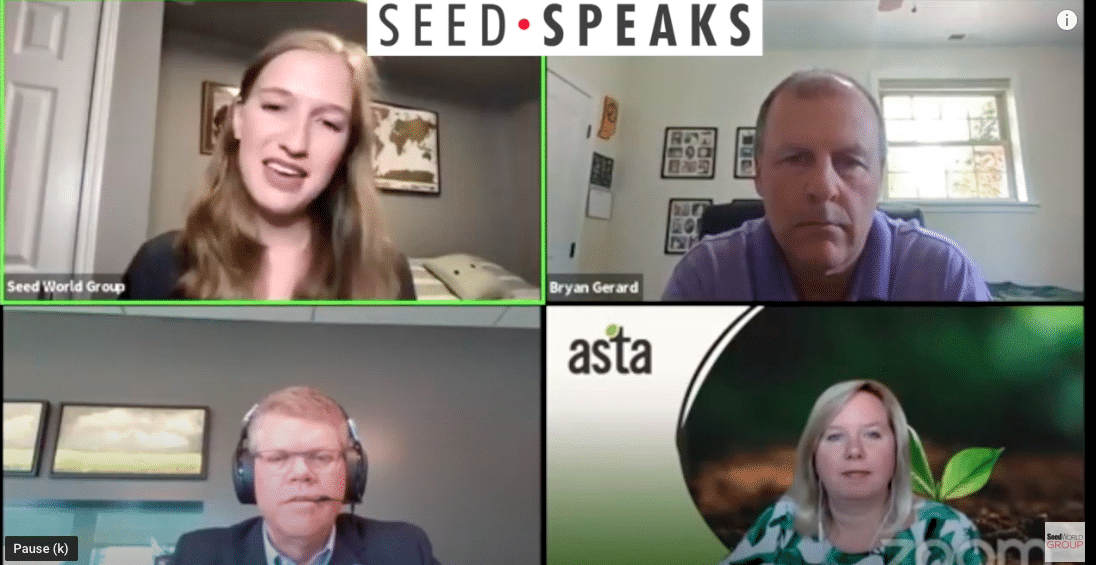 Post pandemic business travel has the seed industry thinking a hybrid meeting and event model is here to stay.

When the pandemic halted in-person work, a new technology emerged — online events. Overnight meetings were switched to Zoom, and conferences were moved to virtual event platforms. As in-person events return, many in the seed industry are thinking some form of hybrid work is here to stay.

“I think we’re going now to talk a little bit about what a hybrid looks like. Continuing on with the virtual model, but also highlighting, people are anxious to get back face to face and, and have these so-called water cooler discussions,” Brent Collins, BASF’s head of canola seeds for North America, says in the July 28 episode of Seed Speaks.

In June, the American Seed Trade Association (ASTA) hosted its first in-person event since the start of the pandemic — the Policy and Leadership Development Conference (PLDC). At it, each attendee sat at their own individual table throughout the conference. Leading up to PLDC, ASTA sent out information about the flow of the event and what safety measures were in place. For those who couldn’t attend, or even those attending who felt under the weather, there was a virtual option.

“We set up the conference as though it was a television broadcast, and we had an anchor desk on stage. And, for the most part, a consistent emcee the whole time. Our president and CEO served as the anchorman, so that the virtual viewers would feel some consistency and feel like they’re in the right place from one session to the next,” Jennifer Crouse, ASTA’s senior director of meetings and services explains during the Seed Speaks episode.

Attendance at the conference was about half in-person and half virtual, with two thirds of presenters being virtual as well. Crouse says it was important to stay on time during the event, with the team having to make announcements three to four minutes before the start of a session for people to return to their seats. This was so they could be consistent for virtual attendees.

ASTA did try to make sure the virtual audience felt included. A question-and-answer button on the live stream page would send questions to the anchor to ask to presenters. However, Crouse says there were few who made use of the option though.

“I think one lesson learned is to not just make sure you’re not forgetting about the virtual audience but have someone assigned that is actually prompting them to engage. Because it’s very easy for them as well to just sit back and be passive viewers, and not take part when they have the tool right at their fingertips to do so,” she explains.

Collins and Bryan Gerard, president and co-owner of JoMar Seeds and Gerard Seed Solutions, both agree moving forward companies will be using a mixture of in-person and virtual meeting formats for both external and internal communications. Internally in-person will be important for day-to-day work.

“We now won’t travel just for the day; we may choose to do it virtually. And so, from that aspect, I think the hybrid internally is going to be more valuable than externally. It is going to help though in the global business,” Gerard says during Seed Speaks. “Before you maybe went to ISF (International Seed Federation Congress) or maybe you made one trip to Europe or one trip to South America a year. Now you’re going to visit with them more often face to face, which is much better than a phone call — the technology is better.”

Collins and Gerard agree though that the most important consideration when deciding how to host a meeting or conference is to put the health and safety of their employees and customers first.

Make sure to check out Ep. 8 of Seed Speaks: