Why it’s an Exciting Time to Work in Wheat Development 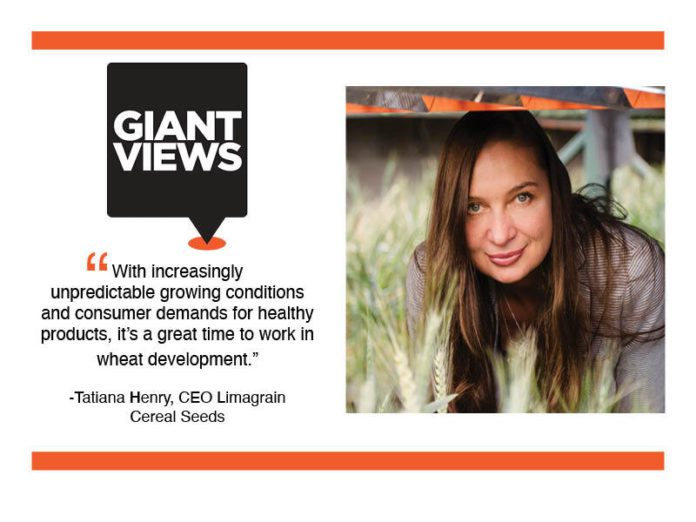 Tatiana Henry has never seen as many people in the Denver airport as she did recently when she was finally able to travel.

Thanks to video conferencing apps, leading a North American wheat breeding company during a global pandemic was perhaps easier than it might have been in the past, but she’s thankful to be able to get out on the road a bit now that public health restrictions are loosening somewhat.

The chief executive officer of Limagrain Cereal Seeds (LCS) based in Colorado is getting back to seeing people in person, as LCS begins the second half of 2021 with a renewed focus. LCS has completed a strategic restructuring, which Henry says frees up resources to enhance its wheat breeding programs, which include a partnership with Limagrain Cereals Research Canada (LCRC), a joint venture between Limagrain and Canterra Seeds.

LCS closed its Midwest and East breeding program in January and has partnered with small grains seed producer Northern Star Integrated Services to manage LCS accounts and wheat genetics in the region.

It was a difficult decision to close one of its original breeding programs, but the U.S. wheat market and business conditions have changed since LCS opened in 2010, Henry notes.

LCS will continue to serve farmers in the Midwest and East by bringing new varieties to market through partnerships. The regional restructuring at LCS frees up resources to enhance wheat breeding programs in the Pacific Northwest, Northern Plains and Central Plains.

The Northern Plains breeding operation is growing in partnership with LCRC. Because Western Canada and the U.S. Northern Plains share similar soil and growing conditions, LCS and LCRC have joined forces to better serve both U.S. and Canadian farmers in the region with an expanded spring wheat breeding program.

“Our Canadian team, which is leading our organization with the implementation of cutting-edge breeding techniques, is developing new varieties faster than ever before,” she says.

“The integration of breeding tools like fast generation cycling, genomic selection and robust field selection means farmers will benefit from advancements in genetics and traits faster than ever before. We’re very proud to be able to use these tools to deliver maximum benefit farmers and the agricultural industry,” she adds.

Such innovation is a hallmark of the LCS and LCRC brands. LCRC has two wheat varieties — CS Daybreak and CS Accelerate — included in Canada’s Variety Use Agreement initiative, a value creation tool to increase plant breeding investment and innovation that’s the first of its kind in the country.

“One of our main breeding focus is usable traits. We already have two major traits in our breeding program — a high-amylose trait, which offers high fiber content to consumers, and a Group 1 herbicide tolerant trade, which brings some flexibility in weed management for growers,” she says.

“We’re very proud of the work we do. With increasingly unpredictable growing conditions and consumer demands for healthy products, it’s a great time to work in wheat development.”

Make sure to listen to all of Tatiana Henry’s Giant Views: