In a neck and neck battle, China’s seed companies are investing in technology like never before.

With nearly 1.4 billion mouths to feed and an ever-expanding middle and upper-middle class, China is sprinting to grow domestic ag production. Growers and producers in the country are seeking more efficient weight gain in livestock and higher yielding grain crops.

As more of the population rises above the poverty level, livestock production and therefore feed grain production, needs to rise to meet demand.

“[Some of China’s] demand [for grain] has increased because of the rebound in the hog population,” said Joseph Glauber, senior research fellow at the International Food Policy Research Institute in a recent webinar by the National Press Foundation (NPF).

All said, China and agricultural companies in the country need better, higher yielding crop varieties faster. More grain means more livestock feed and that means more citizens have full bellies. And in many ways, increasing production comes down to one input: seed.

“Seeds are the source of agricultural production, and China has made significant progress in developing its seed industry in recent years,” said Chinese Vice Premier Hu Chunhua Aug. 27, 2021, to Xinhua Official News. He also noted that the development of the foundation of the seed industry isn’t solid and is an urgent focus.

The country and its officials seek to accelerate the creation and cultivation of key crops for better production overall. They’re also looking to “nurture a batch of modern, competitive seed companies” to increase the supply of improved seed varieties, Chunhua added.

“China doesn’t want to rely on foreign GM seed – that would be a big change to look for [going into the future],” said Andrea Durkin, founding of Sparkplug LLC, in the same NPF webinar. “They’re looking to consolidate and buy assets from international consolidation.”

There’s evidence of this action already. In February 2016, State-owned ChemChina bought Swiss-owned Syngenta for $43 billion. With this acquisition came the hope the company’s long-established research capabilities and processes would slingshot the new owners into China’s seed game in a big way.

Five years later, ChemChina and Chinese farmers have yet to realize the full potential of the Syngenta acquisition.

“It’s not realistic to think that ChemChina can just simply flip an innovation switch after buying Syngenta,” said Garrett Stoerger, partner at Illinois-based Verdant Partners, a transation broker. “There’s a whole lot more to farm-level technology adoption than simply buying the company and gaining access to their technology or all research capability. I think with time they’ll get there, but I think at this moment it would be difficult to claim that Syngenta’s value has been maximized in China. I think it’s very, very far from that.”

While some surmise there’s potential for more growth and value maximization, Syngenta Group reported the first half of 2021 earnings up 24% year-over-year at $14.4 billion.

“We are focused on developing and launching products and services that enable farmers to grow good crops despite drought, heat, flooding, and high wind or other weather extremes,” said Syngenta Group CEO Erik Fyrwald in the Q2 earnings press release. “Our results demonstrate that we are meeting the needs of local growers not only with our sustainable products, but also with our digitally enabled services.”

Pests in China are different than the U.S., so more customized varieties are needed. Therefore, advancing China’s seed quality is going to take sizeable investment in research on its own soil.

ChemChina recently announced it is seeking $10 billion from a Shanghai IPO for Syngenta Group. Syngenta Group is comprised of Syngenta Crop Protection, Syngenta Seeds, ADAMA and Syngenta Group China. It represents one of the largest global companies in sales of seed and crop protection products

“Maybe their investment in technology and innovation will come from government funding and from money from the IPO,” Durkin said. “This is an example of the consolidation [we expect to see]. The government is trying to invest in picking winners they can invest in.”

The Chinese government is investing in more than just seed companies, however.

“We have a new crop gene bank with the storage capacity of 1.5 million accessions – that’s nearly four times as big as the current one under construction,” said Alison Tian, secretary general of China National Seed Trade Association. “Its government encouraged because the protection and utilization of germplasm resources are the material basis for having breakthroughs in original technologies and self-reliant innovation in the seed industry.” 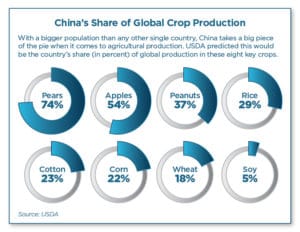 While foreign investment and acquisitions might help increase research and development capabilities, China needs seed catered to its unique environment. That means it’s almost like starting from scratch when it comes to research and development because the country’s pest pressure, weather and consumer acceptance of certain technologies is all unique.

However, the Chinese government is making technological breakthroughs more attainable. Relatively recent changes to policies and regulations have helped reform the Chinese seed industry to enable more innovation in the private sector.

The Supreme People’s Court issued a new judicial interpretation on the right to Plant Variety Protection (PVP) and the Seed Law is also being revised. Specifically, the Seed Law is focused on establishing an essentially derived variety (EDV) system and expanding the scope of PVP rights.

“It means it is significant improvement in the innovation and developmental environment of the seed industry,” Tian said. “And in 2016 a new seed law came into force to simplify the procedures to obtain business licenses.”

Instead of requiring two licenses for seed companies to operate – one for seed production and one for business operation – they’ve been combined.

Throttle Down to Increase R&D

Whether through mergers and acquisitions or increased investment in companies already formed, it appears China is scaling efforts in seed research.

“This is a good thing,” Glauber said. “While there has been a decline [in research spending] over the past 15 years [in certain countries], we have seen the growth is emerging economies like Brazil and China. Thankfully, we’re seeing real investment in agriculture.”

The number of seed companies in China is growing to meet the needs for not only large-scale row crops but vegetable seeds as well. As of recent reports, vegetable seeds are the No. 1 seed import in the country.

“We saw the number of seed companies increase from around 4,300 in 2016 to more than 5,800 in 2018,” Tian said. “It’s more than 6,000 now and rising. As the competitiveness of the private companies increases, they make more investment in seed research.”

It’s important to note that China’s seed industry is more fragmented than the U.S. The biggest company in terms of market share, is Longping High-Tech, who controls just 4% of the market. Syngenta Group comes in at second place, holding over 3% of the market.

To further accentuate the country’s dedication to new technologies and innovation in the ag sector, the government is encouraging university researchers, graduating students and anyone qualified to join the private sector to pursue agricultural research and create new products.

“They’re incentivizing achievement,” Tian added. “If someone creates a new variety or something that can be used and sold, they share in some of that value. [Therefore] the market mechanize for the transformation of scientific and technological achievements is further improved.”

While the country has a long road ahead in terms of research and actually getting new products in fields, the message is clear: China is in the seed game and here to stay.