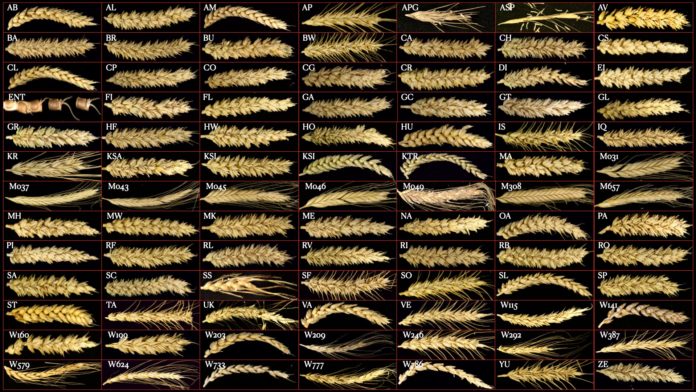 Rothamsted scientists have made a series of unexpected discoveries within the wheat genome which they say should lead to new wheat varieties over the coming years.

Looking at almost 1300 of the ‘promoter’ regions that regulate the activity of genes in 95 different commercial, landrace and ancestral wheats, the team have shown that these promoter regions are remarkably similar when different wheat varieties are compared.

That these promoter regions have remained mostly unchanged means that they are likely to be as important as the part of the gene coding for proteins – and that when slight differences between individual varieties are seen these could have significant impacts on plant traits.

Such traits include grain quality, nutrient use efficiency, disease resistance, and adaptation to climate change.

According to first author Dr. Michael Hammond-Kosack, this new research provides a potential gold-mine for plant breeders and researchers looking to improve crops.

“Despite many decades of work to produce better and higher yielding varieties, on-farm wheat yield increases have stagnated in recent years.

“Most molecular breeding efforts have focused on trying different sequence combinations solely based on the protein coding parts of the genes directly responsible for traits. What we have shown is that these regulatory regions could be just as important as targets for improvement.”

The findings have already been made available to the plant breeding industry, with a great deal of interest in the results.

Dr. Chris Burt, Cereal Genotyping Manager, RAGT Seeds, said: “The ability to identify sequence variations that are known to be present in modern wheat varieties is very important to us as plant breeders. Importantly this work has identified naturally occurring variation in wheat that previously we were blind to.

“Now we know about them, we can identify how these variations relate to key agronomic traits such as disease resistance. We can then track these variations using high-throughput molecular techniques, which provides us with an additional tool to select for improved characteristics in wheat.”

Importantly, despite the promoters being highly conserved, the team did find some sequence differences across promoter regions with many of those residing within binding sites for proteins that switch genes on or off.

The limited sequence variation in the whole promoter regions means these small variations we have discovered in various varieties are likely to play a significant role in the plant’s biology, according to project leader and co-author, Dr. Kim Hammond-Kosack.

“Conventional wisdom had suggested promoters were less important than gene coding sequences in determining the resulting wheat plant, and that over time the promoter sequences would have diverged more than the protein coding sequences,” she said.

“We now know that is not the case.”

With the information the team have discovered, plant breeders and academics now have the ability to mix and match genes based on their different promoter sequence variants and not just protein variation as before.

Most traits in wheat are controlled by multiple genes which have to be combined in the best possible way to help ‘stretch’ the genome and improve traits of interest.

Published in the Plant Biotechnology Journal, the team show how they focused on the genetics of ten key traits of wheat, selected through discussions with UK wheat breeders and researchers, including yield resilience, grain composition, resistance to insect pests and fungal diseases, and tolerance to drought.

Because of the complexity of the bread wheat genome – which includes up to three copies of each gene located on different sets of chromosomes – and the known abundance of gene duplications, the authors decided to take a highly stringent experimental approach to ensure the captured sequences could be traced back to the promoters of the individual genes with extremely high confidence.

This technique, called Exome Capture, had also not been used previously for plant promoter analysis. As a result of the high stringency approach the authors found that the promoters of the three copies of each gene could be captured and sequenced with high confidence.

This project was made possible by the availability in 2017 of the very high quality, fully sequenced and assembled wheat genome of the variety Chinese Spring by the International Wheat Gene Sequencing Consortium (IWGSC).

Kellye Eversole, executive director of the IWGSC, said: “This study confirms what we have suspected since the beginning of the IWGSC, that we don’t only need the genes to understand the wheat genome.

“It is rewarding to see that our strategy of obtaining a high-quality reference sequence for bread wheat instead of draft whole genome sequencing efforts continues to be validated.”

This research project is part of the Defra-funded Wheat Genetic Improvement Network, which focuses on wheat improvement through traditional wheat breeding.