Seed SpeaksRising to the Challenge of Climate Change
Seed SpeaksNewsVideos 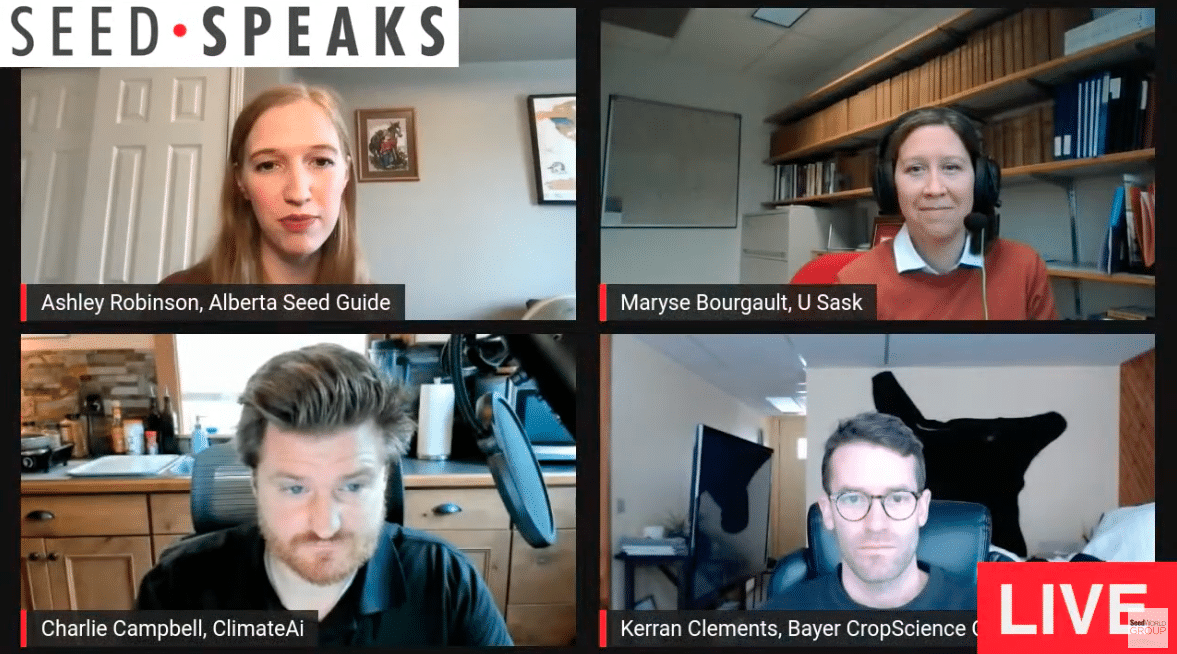 New seed technology and collaboration is helping to keep crops growing as temperatures heat up.

In recent years, extreme weather events seem to have become more common as evident with climate change making headlines. As temperatures rise or fall and droughts or deluges become more common, the seed industry is working hard to breed seeds which are resilient under changing conditions.

“There’s absolutely a fundamental shift going on in the industry at the moment where we’re going from chasing the yield ceiling to now bringing up the yield floor,” Kerran Clements, North American breeding, product development lead, canola for Bayer CropScience Canada, says in the Nov. 24 episode of Seed Speaks. “So, in the good years, you can chase those high yields, but in the bad years, they’re not wrecks, you can still grow a really profitable crop.”

For this to happen though, it’s not just about focusing on one trait in crops, a variety are needed. In canola, which Clements mainly works with, he says numerous traits such as pod shatter technology and multigenic disease packages, are all needed to help make the oilseed more resilient.

Making crops more resilient isn’t just about traditional plant breeding. Maryse Bourgault, assistant professor and the Western Grains Research Foundation chair in integrated agronomy in a joint appointment between the departments of plant and soil sciences at the University of Saskatchewan, is a crop physiologist by training. She says it’s important for plant breeders to understand some of the characteristics of crops they are working with.

“Trying to characterize the environment is really important because no two years are the same. So, we might be in a semi-arid environment. But the type of stress that occurs in one year might be very different from a different year even at the same location,” Bourgault explains.

Understanding the environment a plant is growing in also includes looking at long range climate plans. With extreme weather seeming to be more common now, historical averages aren’t the most reliable information to go off of anymore, Charlie Campbell, growth and BizOps lead with ClimateAi, says.

“Once the seeds are in the ground, we can look six months into the future to understand okay, we’re seeing a heat wave during the flowering period with like a high probability. Can we actually plant sooner to then with that heat wave to make sure there’s enough days to maximize the opportunity for this seed to thrive,” he says.

“With the digitization of breeding, we can create a digital representation of the lines or hybrids based on phenotype, genotype and characterized traits. The concept or the philosophy around this digital twin is you can create this digital twin of the physical plant, and you can apply different environmental simulations or outcomes to see how the genetics will respond,” he says.

By being able to do this digitally, plant breeders are able to discover what crops are better suited to which environments before they are even planted in the ground. Clements says this is used as a proof of concept, which is then physically tested when the crops are planted, thus speeding up the plant breeding timeline.