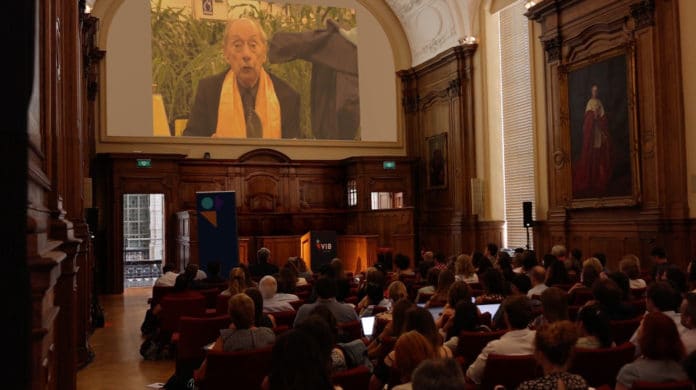 On 21 June, professor emeritus Marc Van Montagu (VIB-IPBO, UGent) received the prestigious GCHERA World Agriculture Prize at a virtual award ceremony hosted by the Nanjing Agricultural University (China). As the 2021 laureate, Van Montagu is recognized for his pioneering research at the forefront of plant biotechnology and his relentless contributions to education and outreach throughout his career.

At the cradle of plant biotechnology

Prof. Marc Van Montagu is world-renowned as the founding father of plant molecular biology. In the early nineteen-eighties, together with his colleague and geneticist, the late prof. Jeff Schell, he unraveled the origin of crown galls – malformations on plants caused by Agrobacteria. They discovered that the Agrobacteria inducing the crown galls possess a small piece of extra DNA – the Ti-plasmid – that enables the transfer and incorporation of bacterial genes into the plant DNA. Through small adjustments to this naturally occurring process, Van Montagu and Schell found a way to insert a gene of interest into the plant’s genetic material. The purposeful genetic transformation of plants was born.

“The 2021 World Agriculture Prize is a highly deserved recognition of the impact of Marc Van Montagu on plant biology and food security. Through his discoveries on Agrobacterium, a powerful and widely used toolbox was created to study the function of genes in model plants and crops. Equally important is Marc Van Montagu’s contribution to the development of genetically modified crops that are cultivated worldwide,” says prof. Dirk Inzé, director of the VIB-UGent Center for Plant Systems Biology and World Agriculture Prize 2017 laureate.

The early days of the agribiotech ecosystem in Flanders

Building on his scientific findings, Van Montagu launched Plant Genetic Systems (PGS) in 1982 as the first agribiotech company in Europe best known for its work on insect-resistant and herbicide-tolerant crops. In 1998, he co-founded CropDesign with Dirk Inzé, a company mainly focusing on genetic engineering of agronomically interesting traits for rice. To monitor growth of the engineered crops under field-like conditions, CropDesign developed greenhouses equipped with the latest digital technologies. Combining the infrastructure with the required scientific expertise resulted in several collaborations with major international agribiotech companies. The successes of CropDesign led to its acquisition by BASF Plant Science in 2006. In 2021, VIB took over the high-tech greenhouses with the support of the Flemish government. The facility is being modernized as the VIB Agro-Incubator in collaboration with ILVO – the Flanders Research Institute for Agriculture, Fisheries, and Food–aiming to make its resources and knowledge available to agribusinesses and researchers, to continue to work towards sustainable applications for agriculture, and to expand the thriving agribiotech ecosystem in Flanders.

Jo Bury (Director emeritus VIB): “Marc Van Montagu is one of the few people who is simultaneously a world-leading scientist and an innovator who excels in converting his breakthrough inventions into products that are now available to millions of people. Marc has been both visionary and highly productive in the translation of his basic research to products for society.”

Marc Van Montagu has trained numerous young scientists in his lab who moved on to establish their own research groups across the world. On top of that, he initiated VIB-International Plant Biotechnology Outreach (IPBO) in partnership with Ghent University in the year 2000. VIB-IPBO strives to bring the latest biotechnological advances to less developed countries and support sustainable agriculture on a global scale.

Marc Van Montagu has received many awards for his contributions leading to modern agricultural biotechnology, including the prestigious Japan Prize for Biotechnology and Agriculture Sciences in 1998, the Genome Valley Award from India in 2009, and the World Food Prize in 2013.  As of today, the World Agriculture Prize 2021 can be added to that list. This award is granted by the Global Confederation of Higher Education Associations for Agricultural and Life Sciences (GCHERA) in recognition of academics at higher education institutes with exceptional and significant achievement in education, research, and innovation in agriculture and life sciences.