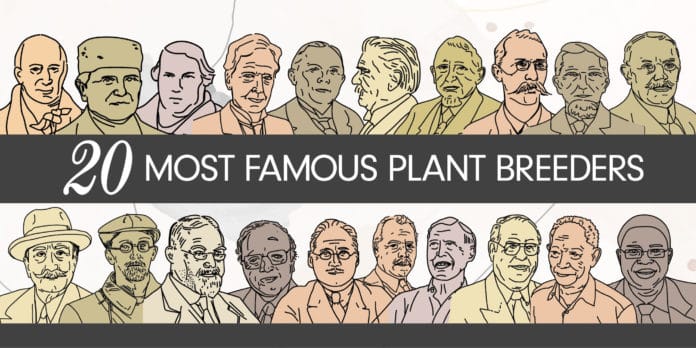 Looking back after two centuries of Mendel

In the year where it has been two centuries since Gregor Mendel was born, it seems appropriate to look at some of the other people who have made a bigger than normal contribution to plant breeding and have enriched our world and our plates with new, better, higher yielding and more delicious plant varieties.

Nowadays, plant breeding is very much an interdisciplinary activity, with lots of input from other departments within a seed company, such as the plant pathology, molecular or marketing departments. But in the old days it was often a one-person job, and from time to time it is good to look back and see on whose shoulders we are standing. No doubt, there are many others that also deserve a spot in this list. Feel free to send us your proposals, and why those persons should be on the list as well.

Read parts one, two and three.

After a B.S. in forestry and a Ph.D. in plant pathology and genetics, Borlaug took up an agricultural research position with CIMMYT in Mexico. There he developed semi-dwarf, high-yield, disease-resistant wheat varieties. During the mid-20th century, Borlaug led the introduction of these high-yielding varieties combined with modern agricultural production techniques to Mexico, Pakistan, and India. As a result, Mexico became a net exporter of wheat by 1963. Between 1965 and 1970, wheat yields nearly doubled in Pakistan and India, greatly improving the food security in those nations. Borlaug was often called “the father of the Green Revolution” and is credited with saving over a billion people worldwide from starvation. Borlaug was awarded multiple honours for his work, including the Nobel Peace Prize, the Presidential Medal of Freedom and the Congressional Gold Medal. As founder of the World Food Prize, he in turn recognized agricultural research and technologies to convince leaders to support them.

Swaminathan worked with Borlaug to develop higher yielding wheat varieties with stalk structures strong enough to support their increased biomass. The first year’s harvest alone tripled previous production levels. Swaminathan also taught Indian farmers how to effectively increase production by using fertilizers and more efficient farming techniques. His efforts transformed India from a “begging bowl” to a “breadbasket” almost overnight, bringing the total wheat crop from 12 million to 23 million tons in four crop seasons and ending India’s reliance on imports. Swaminathan is considered one of the global leaders of the green revolution. For his leadership and role in introducing and further developing high-yielding varieties of wheat and rice, he has been called ‘India’s Breadbasket Hero’ and the main architect of the green revolution in India. He later worked with former Prime Minister Indira Gandhi to establish agricultural policies and programs to enhance long-term self-sufficiency. Swaminathan received the first World Food Prize in 1987 for improving Indian agriculture.

As one of the originators of canola, he became known as the “Father of Canola”. In 1951 he started working for Agriculture Canada, becoming in 1993 a Senior Research Scientist Emeritus. In 1993, he started his own firm and is president of Canoglobe Consulting Inc.

He worked with Baldur Stefansson to develop a variety of rapeseed that could be used as an edible oil. This is known as canola and is one of Canada’s top edible oils and one of the largest oilseed crops in the world. He is the breeder and co-breeder of 13 rapeseed/canola varieties and five condiment mustard varieties.

In 1998, “Downey Street” at a research and development park in Saskatoon was named in his honour. Throughout his career he received numerous honours and awards, including the 1997 Recognition Award of the Canadian Seed Trade Association, in 2002 the Canadian Agricultural Hall of Fame and in the same year the Queen Elizabeth II Golden Jubilee Medal.

He graduated from Southwest Agricultural College in 1953. In the 1960s, after reading of similar research that was underway successfully in maize and sorghum, Longping took on the task of hybridizing rice to increase its yield. After finding a few individuals of male-sterile, he subsequently proved that production of hybrid rice was possible. Longping’s discovery increased rice yields by 20 per cent. At present, around 50 per cent of China’s total number of rice paddies grow Longping’s hybrid rice, and these hybrid rice paddies yield 60 per cent of the total rice production in China. Hybrid rice now feeds about 70 million more people annually. Since he was the first scientist to successfully alter the self-pollinating characteristics of rice to allow for large-scale hybrid rice production, Longping is known as the “father of hybrid rice”. Hybrid rice has since been grown in dozens of countries in Africa, America, and Asia — boosting food security and providing a robust food source in areas with a high risk of famine.

Jones began his career at the Rice Research station in Sierra Leone, where he worked as a breeder for 13 years. In 1991, Jones became the principal breeder of the West Africa Rice Development Association (WARDA), now known as AfricaRice Centre. There, he was head of the team that successfully crossed the Asian and African rice species (Oryza sativa and Oryza glaberrima), resulting in the high-yielding NERICA variety. He did this in collaboration with fellow African scientists and other scientists from Asia, Europe and the US. The NERICA variety is bred for conditions in Africa with the ability to resist weeds, survive droughts and thrive in poor soils. It is a crop capable of increasing farmers’ harvests by 25 to 250 per cent. Jones’ rice stands to benefit 20 million farmers and 240 million consumers in West Africa alone. Together with Longping he won the 2004 World Food Prize during the International Year of Rice declared by the Food and Agriculture Organization of the United Nations.

The 20 Most Climate Friendly Companies Over 2021

The 20 Most Innovative Plant Varieties of 2020

20 Most Innovative Breeders in the European Seed Sector in 2019

20 Most Influential People in the European Seed Sector in 2018